Hangeul Writings from Three Generations of the Princess Deokon Family 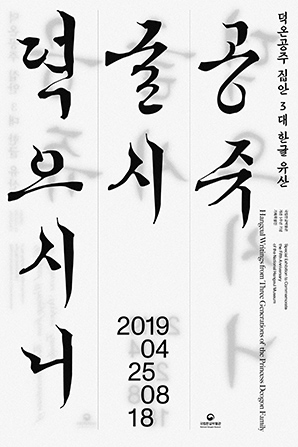 To commemorate its fifth anniversary, the National Hangeul Museum proudly presents the Hangeul Writings from Three Generations of the Princess Deogon Family, which showcases around 200 personal Hangeul writings and other materials from Princess Deogon—the last princess of the Joseon Dynasty—as well as her son Yun Yonggu and her granddaughter Yun Baegyeong.
All of the featured items resonate with the deep familial love of Princess Deogon and her descendants, which transcends time and space. In Hangeul, three generations of the Princess Deogon family found the ideal medium for expressing their care and affection for one another, creating a legacy of love and devotion that has now been reverently preserved through time. Moreover, these precious writings also convey the striking beauty and majesty of “gungche,” the elaborate “court style” of Hangeul writing.
Significantly, the exhibition also includes Hangeul texts written by Princess Deogon’s mother (Queen Sunwon) and her siblings, as well as beautiful Hangeul letters that were either written by women of the royal court or transcribed by court women who specialized in writing.
For this exhibition, the National Hangeul Museum has been diligently pursuing and collecting Hangeul materials related to Princess Deogon since 2016. These efforts culminated in January 2019, when the Overseas Korean Cultural Heritage Foundation transferred sixty-eight works— including Princess Deogon’s personal Hangeul translation and transcription of Record of the Construction of Jagyeongjeon Hall (慈慶殿記) written by her father King Sunjo—to the museum. Thus, this exhibition was made possible by the work of two institutions that recognize the true significance of Hangeul as a means for caring and communicating. We hope that all of our visitors will feel the special familial love of Princess Deogon and her descendants through these historical Hangeul writings.

Introduction
Serve your parents to the utmost while they are alive.
After they are gone, your heart will be broken. What can you do?
For this there is no redress!

Every Korean is familiar with this poem by Jeong Cheol, the Joseon literati scholar, expressing the importance of filial piety towards one’s parents. Here, the poem is handwritten by Princess Deogon’s granddaughter Yun Baekyeong, when she was seventy-seven years old. Even in her golden years, Yun still felt the anguish of her parents’ absence, as she poignantly expressed her regrets for having failed to adequately attend to them during their lifetime.
All of the Hangeul materials in this exhibition evince the boundless family love that imbued the lives of Princess Deogon, her son Yun Yonggu, and her granddaughter Yun Baekyeong.

Princess Deogon: Promoting the Royal Dignity of Hangeul
As the youngest daughter of King Sunjo (純祖, r. 1800-1834) and Queen Sunwon (純元王后, 1789-1857), Princess Deogon (德溫, 1822-1844) was ordained to a lonely life. After losing her father, brother,andsisters in her youth, she then had to endure the ultimate heartbreak of surviving her children. It is perhaps little surprise that she herself died at the young age of twenty-three.
Notably, however, no Joseon princess in history left behind more handwritten documents in Hangeul than Princess Deogon. For example, she produced Hangeul transcriptions of Record of the Construction of Jagyeongjeon Hall (慈慶殿記), written by her father, and frequently transcribed classic sentences from the Hangeul Edition of Guwenzhenbao (古文眞寶), which was handed down from her mother . Princess Deogon’s elegant Hangeul calligraphy is the ideal embodiment of “gungche” (“court style”), which combines the dignity and décor of a princess with a daughter’s deep affection for her parents.

Yun Yonggu: Communicating with Women Through Hangeul
Born as the second son of Yun Hoeseon (尹會善, 1801-1861) and his wife from the Yeoheung Min clan (驪興 閔氏, datesunknown ), Yun Yonggu (尹用求, 1853-1939) was adopted by Princess Deogon. As a noted scholar and relative of the royal family, he was appointed to various high-ranking government posts, even serving as an assistant to King/Emperor Gojong (高宗, r. 1863-1907). After Korea was colonized by Japan, Yun refused to accept the accolades of the Japanese government, opting instead for a life of seclusion, dedicated to writing and painting.
Continuing his mother’s legacy of Hangeul writing, Yun Yonggu wrote an extensive history of China in Hangeul. At the time, most scholarly texts were still written in Chinese characters, so the choice to write in Hangeul was quite exceptional for a renowned scholar of Chinese classics. While upholding the solemnity of a serious scholar, the Hangeul script of Yun’s history book also shows the spirit of a man who wished to reach out to women via Hangeul. Notably, Yun also wrote a book of lessons for women that he gave to his eldest daughter Yun Baegyeong, who was born when he was thirty-five years old. The book embodies the special affection that Yun nurtured for his first daughter throughout their lives.

Yun Baegyeong: Preserving the Royal Heritage of Hangeul
Yun Baegyeong (尹伯榮, 1888-1986) was the daughter of Yun Yonggu and his second wife from the Yeonan Kim clan (延安 金氏, 1873-1954). Embracing her unique ties to the royal court, Yun took it upon herself to preserve her family’s Hangeul documents, include the personal writings of her grandmother Princess Deogon. Demonstrating her particular love and respect for her father, Yun also personally transcribed and supplemented his Hangeul writings. Yun Baegyeong spent her entire life preserving and archiving the royal heritage of Hangeul, as well as further developing Hangeul texts into calligraphic works. In 1929, at the age of forty-one, she became the first person to display a work of gungche-style Hangeul in the calligraphy section of the Joseon Art Exhibition, receiving an honorable mention for her efforts. She went on to create a vast assemblage of Hangeul calligraphy works in the distinguished gungche style, which had a significant influence on contemporary Hangeul calligraphy.

Writing Hangeul Letters in the Past
During the Joseon period, the primary senders and receivers of letters written in Hangeul were women. While many men continued to write in Chinese characters, which were still considered the preferred script of prestigious scholars, Hangeul came to be used by a wider portion of the general populace. Prioritizing the communication of information, Hangeul letters of the time were often written according to a few set formats.
Today, there are about 130 extant Hangeul letters that Princess Deogon and her descendants exchanged with the royal court. Remarkably, Yun Baegyeong personally annotated many of these letters, sharing valuable information about the senders, receivers, and formats. While providing a fascinating glimpse into the lives of Princess Deogon and her family, these Hangeul letters also demonstrate various characteristics of the Korean language from the nineteenth and twentieth centuries, which are rarely used today.