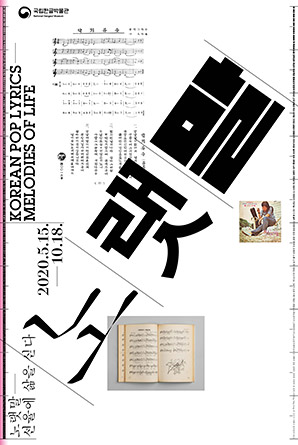 This exhibition celebrates the magic of the Korean language through the lyrics of pop songs, the melodies of our lives. The first section—“Power of Lyrics”—examines the lyrics of some of the most beloved pop songs in Korea’s history, which have brought comfort and joy to millions by representing their lives in words and music. The changing forms and motifs of the lyrics, which evolved to reflect the changing eras, demonstrate how pop lyrics serve as an essential time capsule for history. The second section—“Flavor of Lyrics”—focuses on linguistic techniques and cultural themes from Korean pop songs, such as the use of poetry and the adaptation of foreign songs, exploring how ordinary words are transformed into unforgettable lyrics. Through the warmth and wisdom of these timeless pop classics, we hope visitors can hear the music of their own souls.

1  Power of Lyrics
For decades, pop songs have been delivering the stories and sentiments that captivate people’s hearts. From the 1920s to 1945, pop music helped to sooth the sorrow and resentment of the Korean people under Japanese colonial rule. Then in the 1950s, people found solace from the Korean War and the division of their country in pop lyrics. During the 1960s and 70s, the quantity and diversity of pop songs increased, capturing both the glamour and alienation of the era of rapid industrialization and urban development. Some lyrics also voiced people’s resistance to the suppression of freedom and personal expression. The 1970s and 80s saw the rise of popular folk songs and ballads with sentimental lyrics about loving and caring for those who had been pushed to the margins of society. Starting in the 1990s, Korean popular culture as a whole became more liberal and diverse, culminating in the rise of K-pop as a global phenomenon. Hence, for the last century, pop lyrics have continuously evolved to reflect the changing concerns and desires of the Korean people.

2  Flavor of Lyrics
How do pop lyrics manage to embody the limitless joys and sorrows of the Korean people in such a condensed format? They often do so by creatively applying the unique charms of the Korean language. In some cases, beloved poems or famous foreign songs were transformed into Korean pop lyrics, sometimes with little trace of the original. Other lyrics find poetry in the delicate emotions of daily life. Of particular interest are songs that seek to express the complexities of the world through the innocent eyes of a child. The language of lyrics is completely different from our everyday communication. Words can be shortened, stretched, or repeated to suit the melody and rhythm. Through these subtle variations, lyrics acquire a certain flavor that makes them linger in our mind and on our tongue.