Scenery of Moments in Life:
Hangeul Lyrics from Cheongguyeongeon 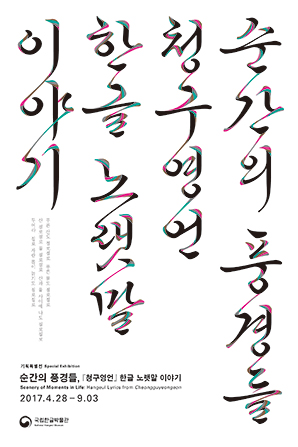 Cheongguyeongeon by Kim Cheon-taek (?-?) is the oldest existing book of Gagok lyrics in Hangeul. Gagok is a type of songs enjoyed by sadaebu, the government officials of higher rankings, during the Joseon dynasty. Cheongguyeongeon contains the Hangeul lyrics of 580 traditional Gagok songs still present today. Kim Cheon-taek intented to preserve and inherit orally transmitted songs by recording them into a book. He collected song lyrics from the end of Goryeo period to 1728 when Cheongguyeongeon was compiled, and organized them into one book.

Part 1, ‘Singing Moments in Life’ introduces lyrics containing the livelihood of daily scenes of the city Hanyang, lyrics frankly expressing love, and lyrics of songs played by the middle class people of the time gathered in a music room. The audience are invited to experience the sense of old traditional songs in a modern setting through a film and other various display methods.

Part 2, ‘Collecting and Transmitting Songs of the World’ introduces the original copy of Cheongguyeongeon along with the background stories and the process of its compilation, contents and lyrics in the book. The compilations of the songs from later periods such as Gagogwonryu and Haedonggayo, instruments and scores used, the changes in the lyrics of Cheongguyeongeon, and the difference between how to play Gagokchang songs and Sijochang songs are introduced.

Through this special exhibition, ‘Scenery of Moments in Life : Hangeul lyrics from Cheongguyeongeon’, the sentiment and words of the 18th century Hangeul songs can be experienced. Also, the exhibition hopes to generate more interests in researches of traditional Gagok song lyrics.